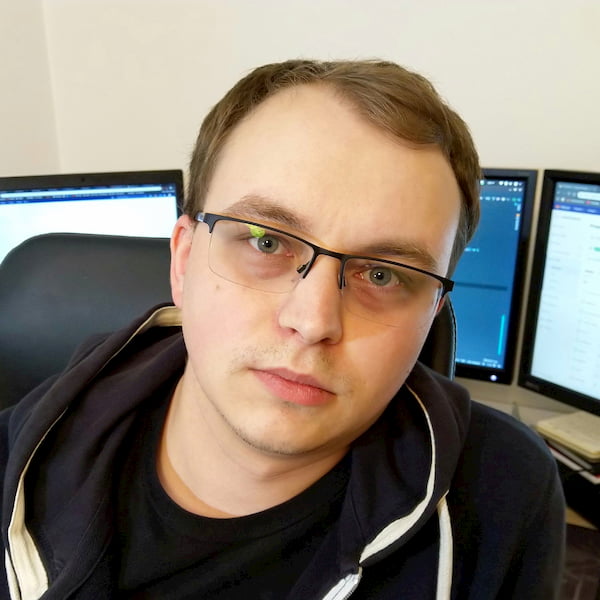 I'm someone who has never doubted that will become a programmer one day. I wrote my first function (random number generator for a lottery taken from a book) when I was eleven years old, but professionally I'm in this field for 10+ years.

Even though I always knew that I would be a programmer, it was never an easy thing trying to stay on top and be the best developer I could be. Luckily that's what I like on this carrier, the push its constantly giving me to learn new technologies and pursuing perfectionism in the code I write.

My main focus is on APIs written in PHP Slim framework, tools in node.js, CI+CD, containerized applications, Kubernetes and Google Cloud. I'm also proficient enough in Golang and recently I started to learn C# with .NET Core. I like developing frontend applications in Angular too.

I also develop and maintain many open source libraries which you can find here (I’m using gitlab more than github):

I can help you with

Not only new applications can benefit from docker, but legacy apps can too. No matter into which category your application belongs, I can help your existing team with docker by pointing them in the correct direction or do the work myself.

Trying to understand and choose the right tools from the ever-growing collection of Google Cloud offerings can be a truly overwhelming task. Let me help you with the cloud platform design and/or deployment into Kubernetes.

I was using Angular.js (version 1), but when Angular 2 was released, I immediately switched to it. From that time I was in love with Angular. It's still astonishing to me that you can build such powerful applications so quickly in typescript (another thing I love).

Writing code for node.js (in typescript) is a way for me to recharge myself and take a break from the "traditional" backend development. I started with node.js in 2012 and collected a vast knowledge of this ecosystem by building many private and open source projects ever since.

Microservices and APIs in PHP

This is where my origin lies. I know PHP better than any other technology. This is the language on which I relied most of the time in my carrier. I watched how it become a modern and powerful language with cool new features. I was using it mainly with Nette framework (which I still sponsor) but recently I switched exclusively to building APIs with Slim framework.

I'm most enthusiastic about passing my knowledge to other people. We can discuss any of the outlined topics or really anything it/cloud/programming related........ And when my brain starts to hurt, I can crimp some RJ45 connectors. I heard that manual work is helping with that...

HyperMedia is the first company where I worked on code which was not written by me or my team. Part of my job was to maintain as well as improve legacy applications. What I'm most proud of is starting the development of new systems (mainly microservices), tools, containerization of legacy applications and moving into Google Cloud.

One of my biggest tasks was, for example, to migrate user photos from HyperInzerce. All of them were stored on ordinary spinning hard drives, now all 7TB is in Google Cloud Storage.

I also created the base for all microservices, Docker containers, deployments into Kubernetes (in Google Cloud), Cloud Run, Cloud Functions, logging, internal tools, and a few other things.

In HyperMedia I learned:

This is the company where I fully embraced the cloud motion for the first time. To be more specific I switched from using VPS's to Google Cloud and Kubernetes.

In WebACAD we were building a new education portal and I worked here as a full stack developer.

I developed the frontend in Angular and backend in PHP Slim.

I remember working for this company the most. This is because I made many friends here, learned a lot of new cool things, the environment was nice and, of course, because I spend almost 5 years here.

My main work consisted of developing a new job portal.

At the same time, I was the only backend developer here so my job was also to find some new colleagues. The situation in the Czech Republic was not ideal, so we looked into other countries and hired people from many different parts of the globe.

When we grew some more we needed for own servers. We decided to use this opportunity to "fix" our local network too. I build our rack with two custom build servers, new gigabit switch, new router and UPS (it was work of art :-)). The servers were based on Intel Xeon CPUs and Supermicro motherboards. I installed the awesome OpenStack system on these servers. We were able to easily host our GitLab, mail server and many other things in OpenStack.

Just before I left I started working on a new simpler job portal workmarket.eu. Also two years after docker was published (2015) I switched everything into docker and started using it everywhere.

In Europa Workintense I learned:

My first job was the development of intranet applications for Osram company.

The first application was for monitoring all the company's computers. It used reports from WinAudit CSV files which were processed and saved into the database.

The second application should have been importing software for wages from one system into SAP. Unfortunately, this was not finished.

These applications were integrated into the existing intranet website and used LDAP.

In Osram I learned:

and I used these languges/tools/...:

How do I work

I work as a freelancer from my own office only and bill hourly.

I value an hour of my work, knowledge, and experience at 900 CZK.